As well as holding events at our own museum, wherever possible we try to support other events in the area. Below are some photographs taken in the last few months and years.

George Collins, who was 14 at the time

Target for the day was to be the railway marshalling yard at Nurnberg, Germany.   493 rd BG Mission #115

The aircraft had flown on the mission to Rheine, Germany, the previous day without any reported issues.

“568” was fitted with Radio Countermeasures (RCM) equipment,  used to jam the German flak gun radar,  for this mission RCM operator Norman Reck was assigned to the aircraft.

After breakfast, briefing and aircraft preparation the engines would have been fired up and the crew would have taken the aircraft up the perimeter track from hardstand 45 (near Thistleton hall) up past the control tower area, to join the line up for take-off.

We know that the first aircraft left the runway at 0900. The runway in use was the main North/South runway.  Take-off was from the top (northern) end.

At 0914 Frederick Stindt in the Pilots seat, and Irwin Roth in the co-pilots seat pulled “568” into the air.  Jewel Haynes, the flight engineer was stood behind them, as was normal practice.   The remainder of the crew were in the radio room aft of the bomb bay, again, standard procedures.

As Jewel Haynes was raising the undercarriage and closing the engine cowls he noticed a fire in the #3...(right hand inboard) engine.  He notified the co-pilot who deployed the fire extinguisher.  At first the fire appeared to go out.

The normal procedure now would be to carry on ahead and go out to sea to jettison the bombs (40 miles N.E. of Southwold) but today, #3 burst into flames again and was (reportedly) burning fiercely

Eye witnesses Arthur Reeve and Arthur Hunt saw the aircraft with the “wing on fire” over Waldringfield,  they were stood on Ramsholt Quay at the time

The pilots made the decision to ditch in the river Deben, and did so just off Ramsholt quay.  The time of ditching was approximately 0920

On hitting the water the Perspex nose broke away allowing the freezing cold water (remember they have had a hard winter) to rush through the plane and it sank almost immediately.

In the cockpit Jewel Haynes was able to undo the co-pilots, and pilots side windows.  Irwin Roth went out of the right hand window whilst Frederick Stindt went out of the left hand side, closely followed by Jewel.

Whilst Frederick was able to make his own way to shore, Jewel had difficulty inflating his Mae West lifejacket, and with only one side deployed his head would have been pushed into the icy water.    Fortunately the two Arthurs (mentioned above)  had already made their way to their boat and were able to help Jewel and bring him back to the shore.

After setting back out to look for the co-pilot they were too late,  his body was found and recovered further downstream.

For the remainder of the crew, there were no survivors and all 8 men drowned.

A rescue/crash team was sent from nearby RAF Woodbridge and the two survivors were taken from the Ramsholt Arms to Woodbridge Hospital, before being returned to Debach

Neither Frederick Stindt nor Jewel Haynes flew in combat again.

Note the aircraft had previously been named by an earlier crew but this name was removed in the first days of December 1944,  so the Frederick Stindt crew only knew the aircraft by the serial number 43-38568   or “568”

On 2th May 1994 the members of the 493 rd BG Association returned, and presented and dedicated the brass plaque next to the side door of the Ramsholt Arms.


Aircraft 568 crash Ramsholt
The 493rd Bomb Group were stationed at Debach Airfield after a hurried construction in 1942 to 1944 this was fairly late on in the war. 2,900 personnel were stationed there. The group went operational on D Day 6th June 1944. 38 four engine bombers took off that day to bomb Lisieux in France. Two of these collided and 20 airmen lost their lives.
Although, the airfield was only operational for one year, 254 servicemen lost lives during that period.
The crew of aircraft 568 crashed at Ramsholt only six minutes after take-off from Debach,
8 of these airmen died but luckily 2 survived.
Today we are here to rededicate that event. Many of the veteran families have travelled a long way for this ceremony and our heartfelt thanks go out to them for making this event so special. Also, volunteers from the 493rd Bomb Group Museum have brought World War II vehicles to commemorate the occasion. 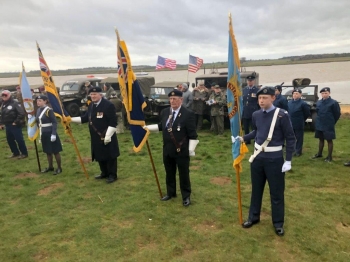 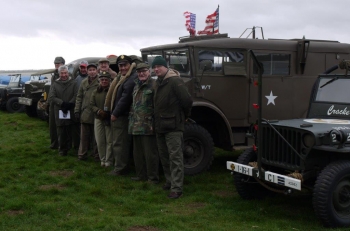 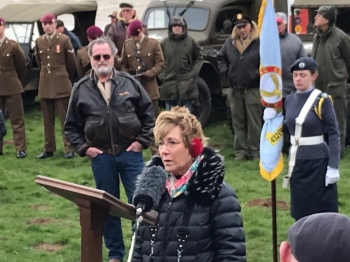 Janice Vasek and Len Haynes- family members of the crew. 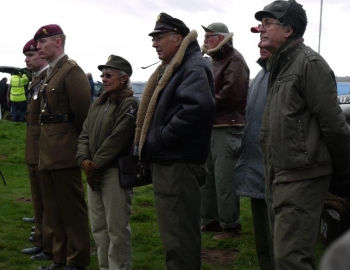 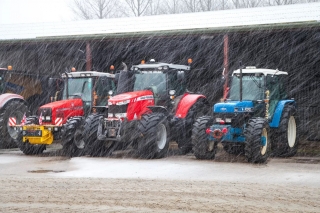 What a difference a year makes! Below is a photo of the last run. Snow and blizzards but very well supported by the Young Farmers Club members. 50 tractors+ took part on the worst day weatherwise of the year. They valiently left Debach air field at about 9.30 but did not get to have their lunch stop at Saxtead because of the road conditions. Scroll down to see the weather conditions the year before! 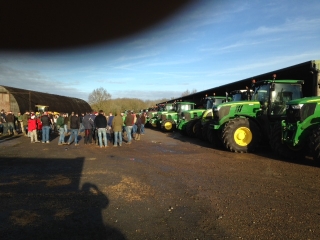 In mid December 2016, the Young Farmers made a tractor run through the local villages. This event was held to raise money for the Air Ambulance Charity. There were in excess of 50 tractors taking part, some new and some vintage. They all met at Debach Airfield and then when on their travels. Well done to the Young Farmers Group and their organiser 'Tory'.

Although the weather was not in anyone's favour, we had a very pleasant visit and also travelled through Framlingham in the parade. 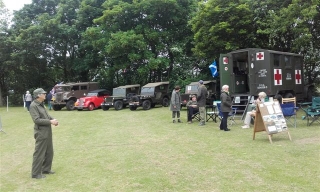 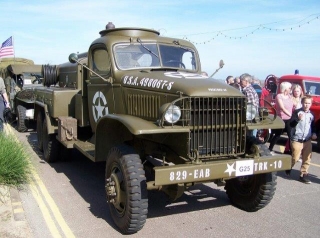 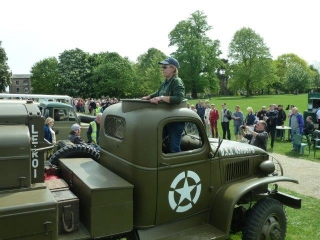 Once again the Volunteers of the 493rd Bomb Group Museum took Felixstowe by storm in a convoy consisting of 9 military vehicles. 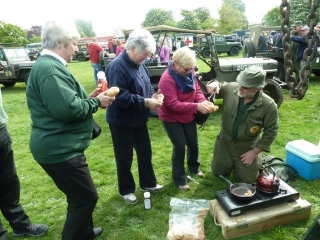 Even the long suffering Wives were catered for thanks to

In mid May the vehicle owing Volunteers were called upon to provide a convoy from Thorpe Abbots Airfield up to Hardwick. This was done with great pleasure and much enjoyment. 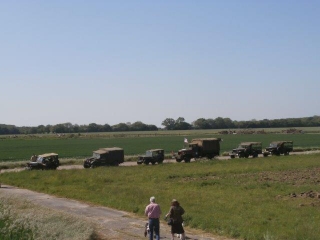 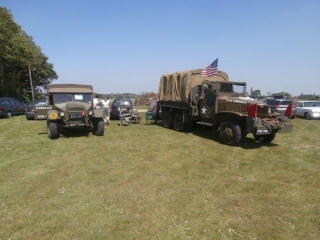 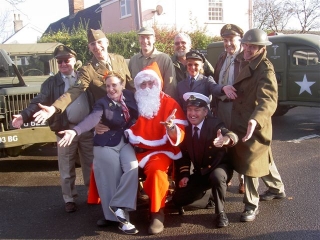 Father Christmas wanted to arrive in style - using a World War II theme, he travelled in a jeep and was escorted by an ambulance, staff car and a weapons carrier. All vehicles and drivers were supplied by our museum and volunteers.

On a wet and windy 6th May, 2012 we joined the Ipswich to Felixstowe vintage vehicle rally. 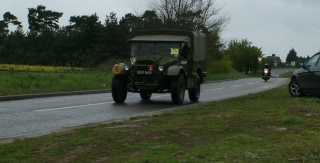 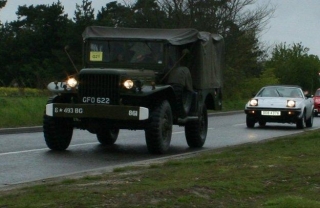 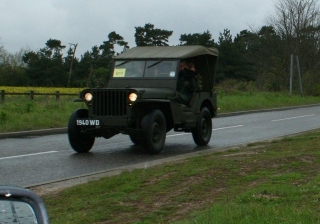 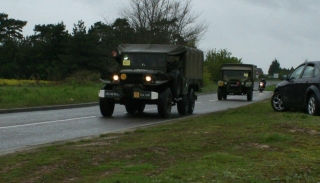 Darren took 'Lucy' ,Jerry took 'Boris' and a Jeep, and Brian also took his Jeep to the Parham Museum open day on the 20th May, 1212. (Boris and Lucy are their well loved vehicles). 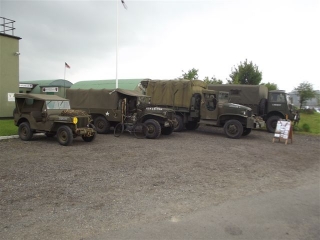